Klára Smolíková (1974) is an inventive and prolific writer. Her author works are focused mainly on children’s readers, but they also include publications for young adult readers – the novel H. U. S. – Hus úplně světovej /H.U.S. – Hus Unambiguously Superlative/ (2015) – and adults – Mrtvá šelma /The Dead Beast/ (2015). She lives in Prague and collaborates with librarians and teachers across the Czech Republic.

Klára studied aesthetics and cultural studies at Charles University in Prague and she is a primary-education methodologist and library educational consultant. She led a seminar about media education at Charles University and taught students of library studies. At the same time Klára was a collaborator of children’magazines, she wrote educational materials for textbooks and created tens of primary school handout sets.

She worked at the Hussite Museum in Tábor and the National Museum in Prague and her books and comic-book librettos often focus on advocating history. She frequently collaborates with her first husband, illustrator Honza Smolík. Their books on medieval history include Husité /The Hussites/ (2012), Řemesla /Crafts/ (2013), Jak se staví město /How to Build a City/ (2014) and Husův dům /The house of John Hus/ (2015). Their comic book album Viktorka a vesmírná dobrodružství /Victoria and Her Adventures in Spice/ was awarded the 2015 Golden Ribbon.

Today Klára is the editor-in-chief of the comic book quarterly publication Bublifuk. She writes with her second husband, a well known sci-fi author Jiří Walker Procházka, detective novels for adults and for children named A+B, the Secret Duo as well.

In addition, she created the screenplay for the bedtime story series Vynálezce Alva /Alva the Inventor/ (2012, 2015) and she is the author of several screenplays for radio fairy tales. 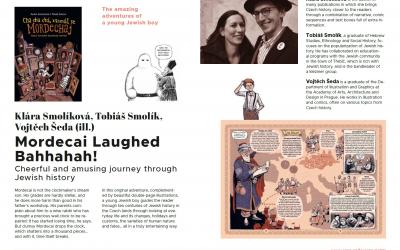